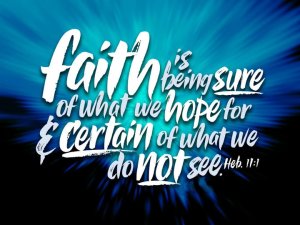 Hebrews 11 has been called faith’s hall of fame.  Some of the people named experienced outstanding victories, but others were severely mistreated, tormented, and even killed.  The people whose stories are recounted were all men and women of faith; they were all confident and certain about something.

As the author of Hebrews recites the experiences of some of our favorite Bible characters, along with some of the most spectacular events recorded in Scripture, it becomes evident why these ancient men and women were so confident and certain.  They were confident because they received a promise from God and were certain God would do exactly what He promised.  That is the essence of faith – confidence in the promises of God.

The term promise, or some derivative, appears eighteen times in the book of Hebrews and seven times in this chapter alone.  What is the significance of that?  Faith and the promises of God go hand in hand.  Where there is no promise, there can be no faith – only hope.  Every person mentioned in this chapter was given a promise by God and their faith was grounded in God’s promise to them.

Living by faith requires we become familiar with God’s promises to us and then live as if He will keep them.  The Bible is filled with promises for believers.  Nothing is more encouraging to our faith than reviewing His promises to us regarding our forgiveness, protection, relationship with Him, and future inheritance He is preparing for all His children.  Just like the men and women of faith in Hebrews 11, we too can be confident and certain God will do what He promised!

Joe has been serving in Christian ministry for over 15 years. He is the author of "Back to the Basics: A Guide for Christian Living." Through a commitment to servant leadership, he strives to proclaim relevant Bible truth, equip the saints for effective ministry, and build up the body of Christ. Joe and his wife live in New Jersey and have two children. View all posts by Pastor Joe Quatrone, Jr.